Primary Congenital Glaucoma (PCG) is a potentially blinding disease of children, which if untreated, would result in a lifetime of blindness. It occurs due to obstruction of the drainage of the aqueous humor caused by a primary developmental anomaly at the angle of anterior chamber. Although PCG is the most common glaucoma seen in infancy, it is still an uncommon disease. The variable incidence in various ethnic groups points towards a genetic basis for the disease. 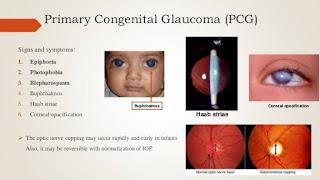 
Clinical features of PCG typically include:


More serious consequence of elevated IOP is that it can rapidly lead to axonal loss and permanent visual impairment in untreated children.

The management of Congenital Glaucoma starts with parental counseling, which includes discussion for: need for surgery and possibilities of multiple surgeries; the need for lifelong follow up and the combination of problems to be tackled (IOP, amblyopia management, refractive correction, possible keratoplasty).

Panicker and associates have graded the severity of glaucoma depending upon the clinical features as given below in table.

Examination under anesthesia is an essential part of PCG management. It includes the following examinations:

Tonometry
General anesthesia usually lowers the IOP, except for ketamine.
The Tono-pen is convenient and easy to use.
The normal IOP in infants under anesthesia is usually in the low teens.
A pressure of 20 mmHg or more should be considered abnormal.

Gonioscopy
A 14 mm Koeppe lens provides a clear view of the angle of the eye and a hand held microscope with a Barkan light or any type of illuminator is necessary for gonioscopy during anesthesia.
In Congenital Glaucoma the Iris usually is inserted anterior to scleral spur and the angle recess is poorly formed.

Fundoscopy
Dilated fundus examination and disc evaluation are essential in diagnosing congenital glaucoma.
Optic nerve cupping larger than 30% of the disc diameter, especially if asymmetric between two eyes, is strong evidence that the disc is under pressure and may be glaucomatous.
Glaucomatous cupping in infants, unlike adults is usually reversible after normalization of IOP.
The younger the child, the faster is the reversibility.

A trabeculotomy-trabeculectomy combined surgery has been found to result in more favorable outcomes and many surgeons prefer that approach.
In case of refractory cases not responding to surgery, a repeat surgery is needed.