The Optic Nerve Head (ONH) is often surrounded by different zones of atrophic-like changes occurring in the retina and choroid. These zones may vary in width, circumference or pigmentation. Since the atrophy usually is adjacent to but does not surround the optic nerve (ON) completely, the term “parapapillary” is preferable to “peripapillary atrophy”. However, these terms are often used interchangeably in literature.

These parapapillary atrophic changes were first described by Elschnig and Bucklers who termed it “halo glaucomatosus”. Primrose also reported on parapapillary glaucomatous changes. According to him:”Peripapillary halo was present in more than half, often quite early in the disease, and was also present in many fellow eyes as yet free from cupping”. He suggested the peripapillary halo could be a useful diagnostic sign in early glaucoma.

Parapapillary atrophy (PPA) can be divided into 2 types, based on location and appearance:
Zone beta is located closest to the optic nerve head. There is loss of the retinal pigment epithelium (RPE) and most of the photoreceptors in this area so that the sclera and large choroidal vessels become visible.

Zone alpha is located circumferentially away from the nerve. In this zone there is irregular arrangement of RPE cells, resulting in both hypo- and hyper-pigmentation. The pathological change is pigmentary disruption of the RPE. It is also called “chorio-pigment-epithelio-retinal atrophy”. 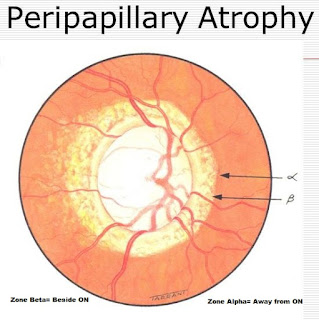 Jost Jonas was probably the first to describe Zones Alpha and Beta. According to him:”The parapapillary chorioretinal atrophy was divided into 2 zones: Zone “Alpha” was characterized by an irregular hypo- and hyper-pigmentation; and intimated thinning of the chorioretinal tissue layer. It was adjacent to the retina on its outer side and to zone “Beta”, or the parapapillary scleral ring of Elschnig on its inner side. Characteristics of Zone Beta were: marked atrophy of the RPE and choriocapillaris, small grey fields on a whitish background, good visibility of the large choroidal vessels, thinning of the chorioretinal tissues, round bordering to the adjacent Zone Alpha on the peripheral side and to the peripapillary scleral ring on the central side. If both zones are present in the same sector, Zone Beta was always closer to the optic disc than Zone Alpha.”

Jonas etal in their study of chorioretinal atrophy in normal and glaucoma patients reported that PPA as a whole and both zones Alpha and Beta were significantly (p <0.00001) larger and Zone Beta was significantly (p <0.00001) more frequent in the glaucoma group than in the control group. The size and frequency of PPA were significantly correlated (p <0.0001) with the glaucoma stage.
(Jonas JB, Nguyen XN, Gusek GC etal. Parapapillary chorioretinal atrophy in normal and glaucoma eyes. I Morphometric data. Invest Ophthalmol Vis Sci. 1989;30:908-18.)

Jonas and colleagues in another article have reported that PPA was larger and occurred more often in patients with glaucoma (compared to normal or those with ocular hypertension). PPA enlarged as the neuroretinal rim (NRR) area decreased and showed a spatial correlation to VF loss. (Jonas JB, Fernandez MC, Naumann GO. Glaucomatous parapapillary atrophy. Occurrence and correlations. Arch Ophthalmol. 1992;110(2):214-222) 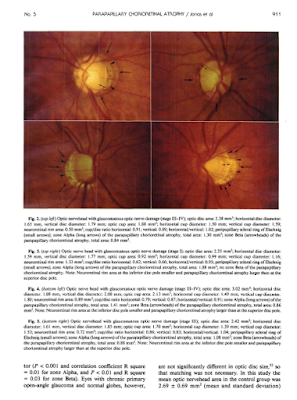 Tezel etal also reported in a study that PPA was already present in 48 (49%) of 98 eyes diagnosed with OHT and which converted to glaucoma. PPA progression was seen in 25 (10%) of 252 ocular hypertensives who did not develop optic nerve or VF damage.
(Tezel G, Kolker AE, Wax MB etal. Parapapillary chorioretinal atrophy in patients with ocular hypertension. II. An evaluation of progressive changes. Arch Ophthalmol. 1997;115:1509-14)

The same group also reported that the extent of progressive changes of the PPA detected during the ocular hypertension period correlated with the extent of changes in the VF parameters, including corrected pattern standard deviation (PSD) and mean deviation (MD) measured after the development of glaucomatous changes. The VF abnormalities occurred in the corresponding quadrants of the progressive PPA. The location of progressive changes of the PPA was concordant with the location of VF abnormalities in 78% of the quadrants.
(Tezel G, Dorr D, Kolker AE etal. Concordance of parapapillary chorioretinal atrophy in ocular hypertension with visual field defects that accompany glaucoma development. Ophthalmology. 2000;107:1194-9)

Hayreh etal have also reported that elevated IOP is associated with increased prevalence and larger size of Zone Beta. NRR area negatively correlated with the area of Zone Beta and the increase in Zone Beta and loss of NRR were independent of the size of Zone Beta at the study’s onset. In contrast, Zone Alpha did not change during the study. (Hayreh SS, Jonas JB, Zimmerman MG. Parapapillary atrophy in chronic high-pressure experimental glaucoma in rhesus monkeys. Invest Ophthalmol Vis Sci. 1998;39:2296-2303)

In NTG, the PPA is usually located inferior to the optic disc. There is significant association of the PPA with VF (functional) and ON (structural) damages seen in NTG. The locations of the VF defects correspond significantly with the location of the PPA and the topography of the nerve corresponds with zone beta.
(Maryke Neiberg. coavision.org. Peripapillary atrophy)

However, there have been studies which refuted the importance of PPA in glaucoma. See etal have compared the rates of global and sectoral NRR area (NRA) and peripapillary atrophy area (PPAA) change in open-angle glaucoma patients and normal control subjects and to determine the relationship between rates of NRA and PPAA change.

There was a high correlation between ranked sectors of NRA change in patients and controls (P=0.001), indicating similar patterns of NRA decline in patients and controls; however, this was not the case for rates of PPAA change. These findings indicate an age-related regional susceptibility of the optic disc that may be accelerated in glaucoma. The poor relationship between rates of NRA and PPAA change suggests their temporal dynamics are uncoupled.
(See JL, Nicolela MT, Chauhan BC. Rates of neuroretinal rim and parapapillary area change: a comparative study of glaucoma patients and normal controls. Ophthalmology. 2009:116;840-7)

Ehrlich and Radcliffe in their study concluded that “while PPA variables on their own were significantly predictive of the odds of open angle glaucoma, this association was greatly attenuated by adjustment for 4 variables that comprise part of a typical glaucoma evaluation: age, Central Corneal Thickness, IOP & C:D R. Furthermore, when values of these covariates were already known, modeling of the odds of OAG was not greatly improved by the consideration of PPA variables. This suggests that in clinically evaluating and diagnosing glaucoma there may be little incremental value to assessing PPA. Therefore, PPA may be more useful for evaluating progression than for detecting glaucoma.”

Savatosky etal performed a longitudinal study to analyze the association of PPA area and conversion from OHT to glaucoma. They reported Zone Beta to increase in size (p <0.0010) in both eyes with incident POAG and matched controls. The increase in size did not differ between cases and controls over a mean follow-up period of 12.3 years. The results did not show a difference in size of the Beta zone at baseline between eyes that proceed to develop glaucoma and those that do not. Moreover, the beta zone enlarged equally in case and control eyes during follow-up. (Savatovsky E, Mwanza JC, Budenz JL etal. Longitudinal changes in peripapillary atrophy in the ocular hypertension treatment study: a case control assessment. Ophthalmology. 2015;122:79-86)

The clinical description of PPA should be distinguished from the physiological grey crescent that surrounds the optic nerve. The grey crescent represents a localized deposition of pigmentation demarcating the edge of the optic disc. Other crescents that can be noted around the optic nerve include the myopic crescent which is a white sharply demarcated crescent to the temporal side of the optic disc, presents bilaterally and is generally associated with axial myopia. This type of crescent does not show pigment mottling that is typically associated with PPA. The choroid is absent in this area, the retina is transparent and the sclera appears as a white crescent. In pathological myopia, the atrophic crescent may increase in extent. Contrasting with a scleral crescent, a choroidal crescent represents absent RPE in a temporal crescent at the disc. (Neiberg M)

Apart from physiological grey crescents, tilted or mal-inserted nerves could also prompt a diagnosis of PPA. Malinsertion may add to the glaucomatous appearance of the nerve. It is well known that tilted discs are associated with superior temporal VF defects, and other VF defects could also accompany tilted discs.

Age related atrophy of the RPE and rods can lead to appearance of PPA. There can be a spectrum of complete absence of RPE to loss of pigmentation of RPE.

If the PPA continues to deteriorate despite good control of IOP, this more likely is representative of the patient’s vascular risk for progression of glaucoma.

When significant PPA is present, population derived normative age data on TD-OCT should not be used in analysis, as this might lead to an overestimation of the glaucomatous damage. Loss of the characteristic double hump pattern is seen and the TSNIT graph shows irregular high spikes that make the pattern difficult to interpret reliably. SD-OCT has shown that retinal thickness in patients with PPA is thinner compared to patients without, but there was no statistical difference in the thickness of the respective nerve fiber layers.

PPA has been reported to precede disc hemorrhage in 80% of patients. (Neiberg M)

Acute angle closure does not show a direct relationship with PPA. The PPA area does not enlarge despite any increase in the cupping after the acute attack. This indicates a difference in the mechanisms responsible for the development of changes seen in open- vs closed-angle glaucomas. PPA is not seen to increase after an attack of Anterior Ischemic Optic Neuropathy. Therefore, the exact vascular pathology underlying the development of PPA is not clear. Hence, this sign may not be significantly contributive in the diagnosis of glaucoma. However, this sign could be recorded to assess for subtle progression. 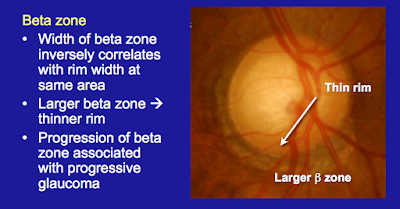 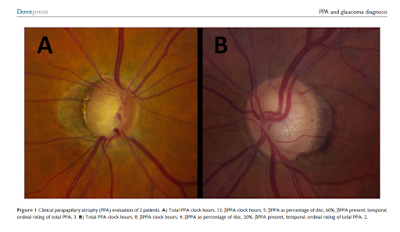