Not since 1996, the year in which FDA had approved Latanoprost, has another class of glaucoma drugs been marketed. However, now there is a distinct possibility that drugs which improve outflow through the trabecular meshwork could be approved. Among those agents which enhance aqueous outflow through the conventional pathway (so-called “pharmacologic trabeculectomy”), the ROCK-inhibitors show the most promise.

The trabecular meshwork cells exhibit a smooth-muscle like phenotype based on their expression of various smooth muscle specific proteins including α-smooth muscle actin (α-SMA) and CPI-17 (Protein kinase C-potentiated protein phosphatase-1 inhibitor protein).  Numerous microfilament-based structures are also found in cells of the outflow pathway. These include focal contacts, adherens cell-cell junctions and bundles of microfilaments.

The Rho-associated coil-forming protein kinases (ROCK) are protein serine/threonine kinases. They occur in 2 isoforms: ROCK1 and ROCK2. The former is located on chromosome 18 and contains 1354 aminoacids. The latter is located on chromosome 12 and encodes a 1388 aminoacid product. In humans ROCK1 and ROCK2 are expressed in majority of tissues, including the trabecular meshwork and ciliary muscle cells. 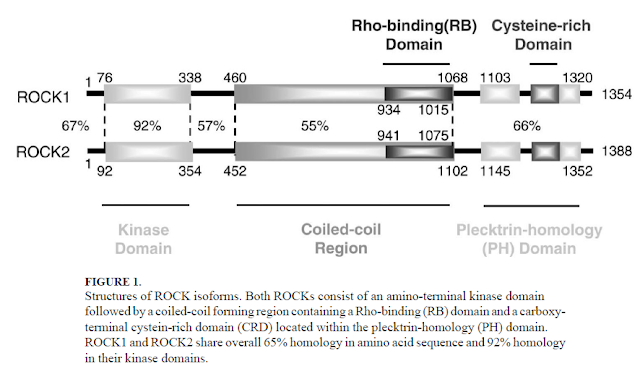 Structurally, ROCKs are composed of 3 major domains:
The 2 isoforms of ROCK are the downstream targets of the small GTP-binding protein: Rho. The Rho GTPases act as molecular switches by cycling between an active GTP-bound and an inactive GDP-bound form. On binding to Rho, the catalytic activity of ROCKs is moderately enhanced. ROCKs mediate a number of important cellular functions such as cell shape, motility, secretion, proliferation and gene expression. ROCKs also mediate RhoA-induced actin cytoskeletal changes by inhibiting MLCP. These directly affect the contractile properties of the trabecular meshwork outflow tissues. ROCKs also activate LIM-kinases which stabilize filamentous actin to reduce the occurrence of cell migration.

ROCK-inhibitors induce reversible modifications to cell morphology and cell interactions in the eye that facilitate greater outflow of aqueous humor through the trabecular meshwork and ultimately lower the intra-ocular-pressure (IOP). ROCK-inhibitors uncouple actin from myosin, 2 proteins which interact to contract the ciliary muscle. Thus, specific components of the cellular cytoskeleton are disrupted, reducing the contractile tone of the tissues of the conventional outflow pathway. By inhibiting Rho-kinase actin-myosin contractility, it also allows the cells to relax. This creates space between the cells through which fluid can exit from the eye.

ROCK-inhibitors also have a vasodilatory effect, which may lead to reduced episcleral venous pressure.

ROCK-inhibitors have been found to influence neuron survival and axon regeneration. In a study, Fasudil protected against glutamate-related excitotoxicity in the retina and better preserved cells of the ganglion cell layer on exposure to N-methyl-D-aspartate.

Side effects of ROCK-inhibitors include mild conjunctival hyperemia, which spontaneously resolves over several hours. This is assumed to be due to the vasodilatory effect of the drug. It is seen in 50-60% of the treated individuals. By instilling the drug at night, there could be a symptomatic decrease in the frequency of this side effect. Small conjunctival hemorrhages and cornea verticillata (seen in patients who are on concurrent systemic amiodarone) are also seen. These features are asymptomatic and do not reduce visual function.

ROCK inhibition was also found to reduce the intraocular penetration of concurrent Timolol instillation (presumably by increasing the elimination through dilated conjunctival vasculature).

However, no significant systemic side-effects have been reported with these agents.

Although a number of ROCK-inhibitors were studied, yet only few have reached Phase 3 trials. Among them Netasurdil, Roclatan and Ripasudil are prominent. The last is available only in Japan. 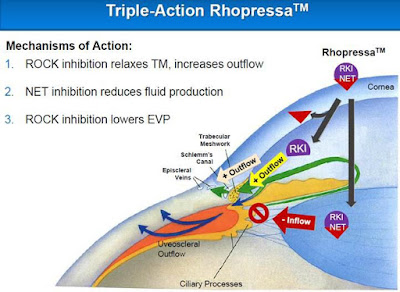 Roclatan theoretically lowers IOP through the following mechanisms:
Phase 1,2, and 3 clinical trials of Netarsudil were conducted on more than 2000 patients. 0.02% once daily in the evening was found to be the most efficacious and well tolerated dosing regime. The phase 2 clinical trial included comparison with Latanoprost. IOP reductions in both groups were similar (-5.8 mmHg in Netarsudil vs 5.9 mmHg in the Latanoprost group). Among all patients Netarsudil was 1 mmHg less effective than Latanoprost (-5.7 vs 6.8 mmHg) and did not meet the statistical analysis for noninferiority of Netarsudil to Latanoprost.

In phase III, Mercury 2 trials, Roclatan achieved successful efficacy results. Roclatan treated patients achieved 16 mmHg or less IOP in 61% cases, while ≤14 mmHg was achieved in 33% cases. This was comparable to those treated with individual components in whom similar results were achieved in 40% or less and 15% or less respectively. The product was well tolerated with a 10% discontinuation rate.

The advent of new drugs, which modulate aqueous outflow through the trabecular meshwork, which is a more physiological route, might have a positive correlation to IOP control in glaucoma/Ocular hypertension patients. According to one theory, by giving prostaglandin-analogues, we increase uveo-scleral outflow and further reduce the activity of the conventional outflow pathway. Thus, ROCK-inhibitors may prove to be an important milestone in glaucoma management. 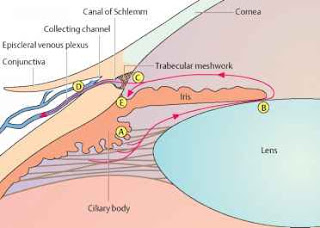 Glaucoma is regarded as a type of progressive optic nerve degeneration. A number of theories regarding the pathogenesis of this condition have been presented. These theories include the “mechanical theory” which describes glaucoma in terms of physical changes in the optic nerve due to high intra-ocular pressure (IOP), the “vascular theory” which centers around ocular blood flow and vascular dysregulation, the “biochemical theory” which is based on a number of biochemicals in ocular tissues causing GOND and the “genetic theory” which regards certain genes as the culprit in glaucoma causation. Some other relationships such as intracranial pressure, lymphatics and exposure to environmental factors are also being investigated in glaucoma causation.

Glaucoma is currently being treated by medical, laser or surgical methods. Diverse classes of drugs are being used mainly to lower IOP, the main risk factor known. Among these pharmacological agents one natural source to control glaucoma has been marijuana. This agent is being discussed in this glog post as it is an interesting agent in the medical management of glaucoma. 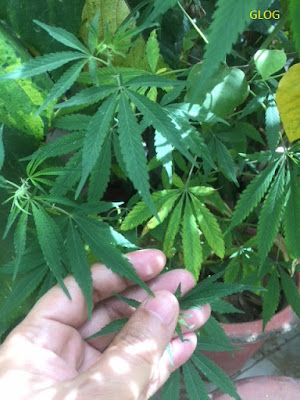 Marijuana as an IOP lowering agent was first reported in the 1970s. Mexican marijuana, containing 1.8-2.8% delta-9-tetrahydrocannabinol (THC), was found to consistently reduce aqueous production through the ultrafiltration mechanism. The maximum ocular hypotensive effect of 25-30% occurs between 60-90 minutes and the duration of action lasts for 3-4 hours. Thus, an individual has to smoke 8-10 cigarettes per day to achieve adequate IOP lowering.

Apart from smoking, marijuana can be administered by oral, sublingual and eyedrop instillation. Oral and sublingual routes avoid the deleterious effect of marijuana smoke on the lungs, but are still limited by the other systemic side-effects. In a study conducted on glaucoma patients, who were offered THC pills and/or smoking marijuana cigarettes, 9 out of 9 patients discontinued use by either method within 9 months due to intolerable side effects. Since glaucoma is a lifelong disease, use of THC for prolonged periods of time is not a reasonable treatment option.

Marijuana use is associated with cardiovascular changes such as tachycardia and lowered blood pressure (BP). Usually, these changes return to baseline within 3½ hours. Sudden precipitous fall in systolic BP have been reported in 18% of marijuana-naive subjects inhaling Mexican marijuana. Features of these syncopal-like effects include sudden fall in BP, lightheadedness, a faint and thready pulse, often accompanied by nausea and bradycardia. As most glaucoma patients are in the older age group, who already have a high propensity of falls, so feeling dizzy or uncoordinated is especially risky. Heart problems are also common in this age group, with marijuana induced tachycardia imposing a higher risk. Another aspect of lowered BP is reduced ocular blood flow, which could prove detrimental to the health of the optic nerve.

Other potentially risky side-effects of marijuana include:
1. Weakening of the immune system, with decreased ability to fight infections.
2. Marijuana’s mood altering effects, such as problems with memory, thinking and concentration, prevent the patient who is using it from driving, operating heavy machinery and functioning at maximum mental capacity.
3. Marijuana cigarettes also have compounds which damage lungs and the brain in the long run.
4. Smoking is a major risk factor in the development of age-related-macular-degeneration, which can aggravate vision loss from glaucoma. It is also a risk factor in the development of cataracts.

Manufacture of THC eyedrops is limited by low water solubility of the active ingredients preventing them from entering the eye. However, topical 0.1% THC in light mineral oil vehicles has been tried. The maximum ocular hypotensive effect was shown to occur at 6 hours with significant effect persisting for 8-12 hours.

Recently receptors for the active ingredients of marijuana have been found in ocular tissues, pointing to a possible role of locally administered marijuana.

Reports from brain research describe the protective effect of cannibinoid components of marijuana on nerve cells. Incidentally, such nerve cells are also present in the optic nerve where these compounds could prove useful as neuroprotective agents.

In summary, while marijuana or its active compounds may have potentially useful effects in glaucoma management, further research is required to adequately understand the usefulness of this herb. 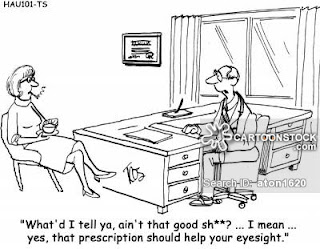 Allergan had organized a symposium titled “The changing focus of glaucoma care” on 29th March 2018. The event was held at the Hyatt Regency Hotel, Kota Kinabalu, Malaysia. 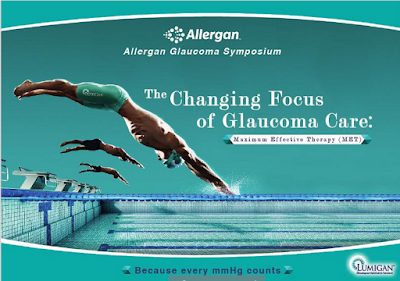 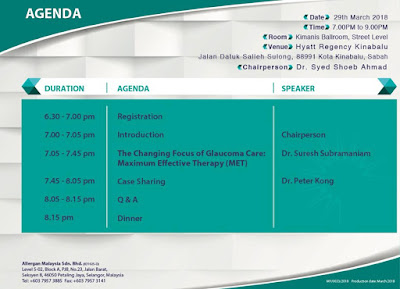 As the chairperson, I had the opportunity to introduce the speakers and manage the proceedings of the symposium.
There were 2 invited speakers : (1) Dr Suresh Subramaniam from Hospital Permaisuri Raja Bainun, Ipoh, Malaysia (2) Dr Peter Kong, who runs the Dr Peter Kong Eye Specialist Centre in Kota Kinabalu.
Dr Suresh presented 2 talks. The first was on maximal effective therapy (MET) and the second on prostaglandins in glaucoma therapy. Maximal effective therapy centers on 3 points: (1) Every mmHg of IOP reduction counts. Early, effective therapy can bring down IOP and reduce the slope of VF progression. (2) IOP targets have to be individualized to ensure optimal therapy to slow the rate of VF progression. (3) The adherence/efficacy challenge. What makes a patient less likely to achieve the target IOP and how can we address these factors? Compliance is a serious issue in glaucoma management. 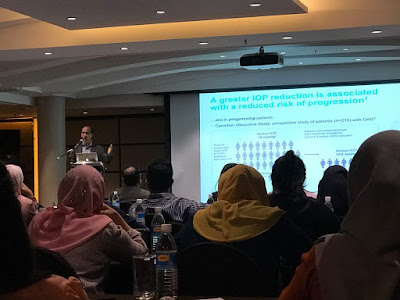 A number of PGs are now available for glaucoma therapy. It may become difficult for Ophthalmologists to decide which PG is the best for their patients. In this regard 4 factors can help to differentiate among various agents. These include: (1) Mode of action (2) Preservative (3) Efficacy (4) Cost. Lumigan (bimatoprost) is a prostamide and distinct from prostaglandin analogues in that it has dual trabecular as well as uveoscleral outflow mechanisms. It also has a SUCRA value of 100%, indicating its extreme effectiveness in reducing IOP compared to PGs.

Dr Peter Kong presented a few of his cases where he implanted Allergan’s Xen gel stent. Most of his patients had good IOP control either as a stand-alone procedure or after the addition of an IOP lowering agent.
Posted by Editor: Syed Shoeb Ahmad; Sub-Editor: Ghuncha Khatoon at 8:15 PM No comments: