The Ministry of Health organized a cataract phacoemulsification camp (KK1M) in the town of Keningau, Sabah, Malaysia from 21st July 2017 to 23rd July 2017. It was an honor to be a part of the team which operated there. 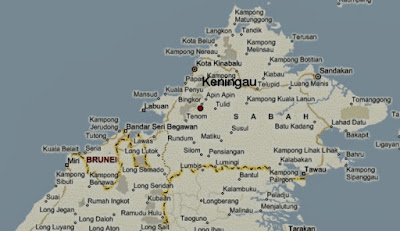 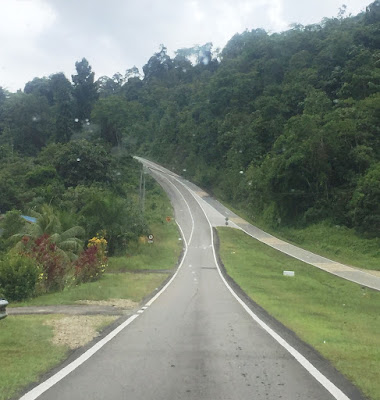 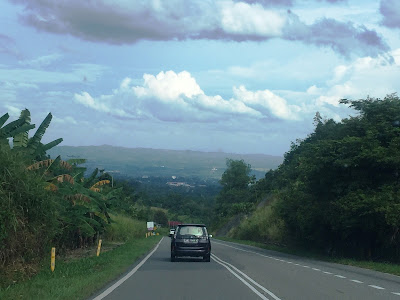 Around 35 patients were operated there by the team of ophthalmologists from Queen Elizabeth Hospital, Ampang Hospital and Keningau Hospital. 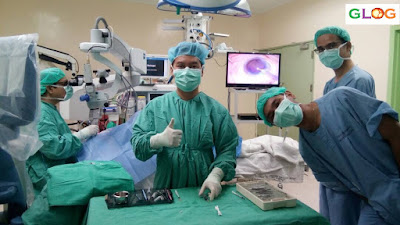 Aurovue intra-ocular lenses were implanted in almost all patients. 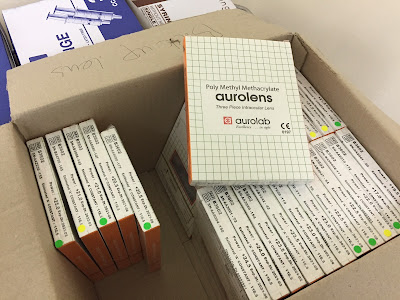 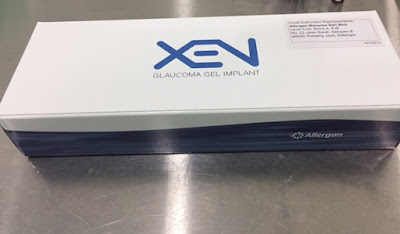 On 12th July 2017, had the opportunity to visit Dr Peter Kong Specialist Eye Center in Kota Kinabalu and witness the first Xen implantation in Sabah state of Malaysia. The first patient was a lady with primary angle closure glaucoma in whom a Xen implantation alone was done. The other, another female patient had an open angle glaucoma, in whom a phacoemulsification as well as Xen implantation was done. 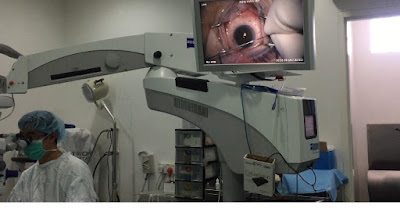 Observing the technique from close, it seems like there is a learning curve to this procedure, though not a very steep one. Two things noticed were: (i) the insertor can be made more user friendly and (ii) the company should find an appropriate blade to put the insertor in the anterior chamber so that the insertor and anterior chamber depth remain stable during the procedure.
Posted by Editor: Syed Shoeb Ahmad; Sub-Editor: Ghuncha Khatoon at 8:39 PM No comments: 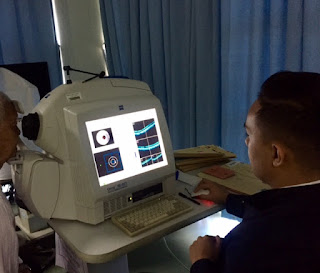 The Cirrus RNFL map represents a 6 x 6 mm cube of A-scan data centered over the optic nerve in which a 3.4 mm diameter circle of RNFL data is extracted to create what is referred to as the TSNIT map (temporal, superior, nasal, inferior, temporal).  It is displayed as a false color scale with the thickness values referenced to a normative database. The TSNIT map displays RNFL thickness values by quadrants and clock hours, and the RNFL peaks give a sense of the anatomic distribution of nerve fiber axons represented by the superior and inferior bundles that emanate from the optic nerve.

SD-OCT measurements are compared against an age-matched normative database. The normative database for the Cirrus SD-OCT consisted of 284 healthy individuals with an age range between 18 and 84 years (mean of 46.5 years). Ethnically, 43% were Caucasian, 24% were Asians, 18% were African American, 12% were Hispanic, 1% were Indian, and 6% were of mixed ethnicity. The refractive error ranged from -12.00 D to +8.00 D.  Due to this relatively small normative database and wide variation of distribution of RNFL, many results obtained by SD-OCT may be flagged as abnormal statistically in patients who are not represented in the database and thus not necessarily representing real disease. Clinicians should use caution to avoid overtreating “red disease” in these situations.

The Cirrus normative comparison for ONH parameters is based on the patient’s age and disc size; while, for the RNFL is based on patient’s age. For a particular age and disc size the patient is expected to have rim volume, C/D ratio etc within certain ranges. Those parameters are shaded red, yellow, green and white based on how they compare with normal ranges. When no normative data is available for comparison, the parameters are shaded grey. This applies to disc areas <1.3 mm2 or >2.5 mm2, since the database has insufficient number of subjects with the disc areas of these sizes.


Based on a longitudinal study, the age-related rate of reduction in RNFL thickness has been estimated to be -0.52 µm/year, -1.35 µm/year, and -1.25 µm/year for average, superior, and inferior RNFL respectively.


i.OCT images can be acquired through a 3mm pupil in the absence of media opacities.


iii. The patient can be asked to blink a few times before image acquisition is started.


iv. A lubricant eyedrop can be instilled in case of dry eyes.


v.The patient is asked to look into an internal fixation target. (Green star-like in Cirrus)


vi.A circular or rarely a linear image is then acquired.

(B). OCT REPORT PRINT-OUT: The Cirrus report shows assessment of the RNFL and ONH of both eyes based on the 6mmx6mm cube captured by the Optic Disc Cube 200x200 scan. Some models of the OCT can display optic disc modules including parameters such as rim area, disc area, average- and vertical- C/D ratio. 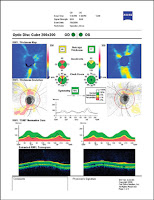 
1.       KEY DATA: This forms the first part of information for the printout and consists of the date and time of test; registration number, age, sex and date of birth of the patient; technician, and the “signal strength”, which should be above 8. 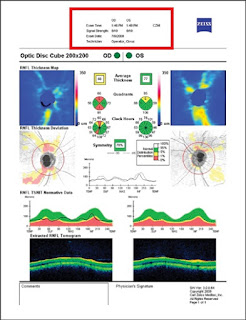 2.       RNFLT MAP: Topographic map of RNFL thickness in an hourglass shape of yellow and red colors is typical of normal eyes. The color scale in microns on the left of the image for reference is also provided. Warm colors (red, yellow) represent thicker areas, while cooler colors (blue, green) represent thinner areas. 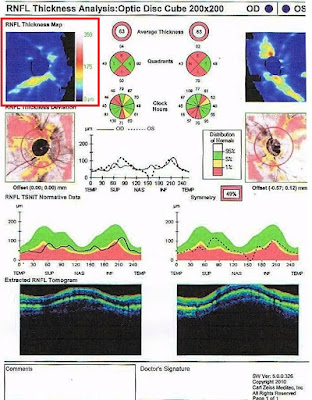 
3.       RNFLT DEVIATION MAP: It depicts the map of RNFL deviation from normal values overlaid on an en face fundus image. It also shows the machine-derived boundary of the cup and the disc and also the calculation circle placement for the RNFL. It depicts the deviation from the normative database in the form of color-coded superpixels, utilizing only yellow and red colors. Green color is not used since most of the superpixels would be green in a normal individual and would be present over most of the image, obscuring the underlying fundus image. Thus, any region which is not red or yellow indicates it is within normal limits. This map gives a gross clue regarding the cup-disc ratio and position of the vessels in the cup. The RNFL deviation map is useful to discuss the condition with the patient. 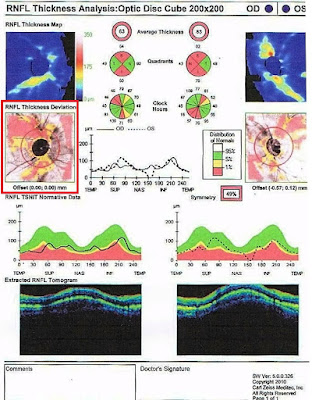 
4.       QUADRANT AND CLOCK-HOUR RNFLT: A display of the average RNFLT along the whole calculation circle is present on the top. Quadrant and clock hour averages are given below and color coded in the same scales as rest of the report (based on their P value with respect to deviation from age-matched data in the normative database of the OCT machine). They specify the location of the pathology quadrant and clock hour wise. 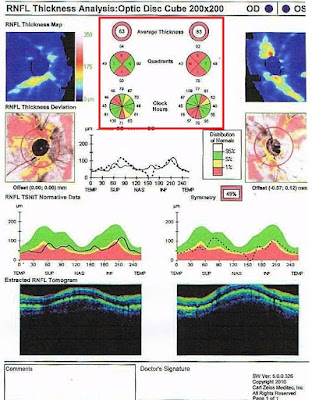 
In an age-matched normal population, the percentiles regard each specific measurement of RNFL in the following way:


(iii)The thinnest 5% of measurements fall in or below the yellow area (Yellow between 1% and <5%, indicating “suspect” area).


(iv)The thinnest 1% of measurements fall in the red area. Measurements in red area are considered outside normal limits (Red area falls in <1%). 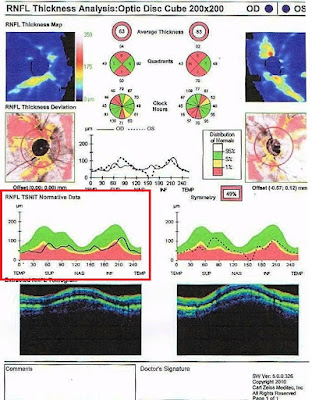 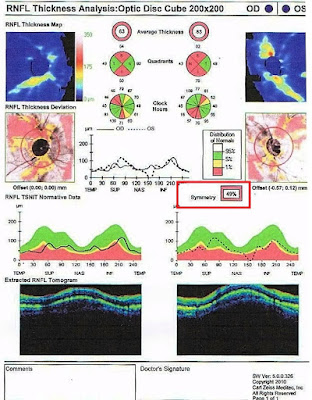 
7.       RNFL-TSNIT THICKNESS GRAPH: This shows the plot of RNFLT on the Y-axis (vertical) and the retinal quadrants on the X-axis (horizontal). Normally, this has a “double-hump” appearance due to the thicker RNFL in the superior and inferior quadrants. 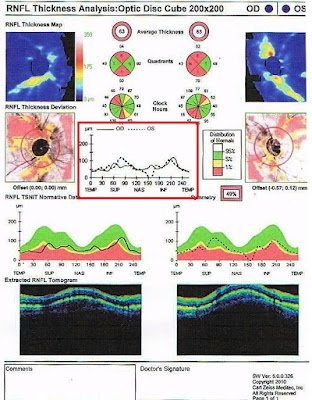 
8.       EXTRACTED RNFL TOMOGRAMS: They display the reflectivity of the RNFL. They are not of much clinical significance as far as decision making is considered. 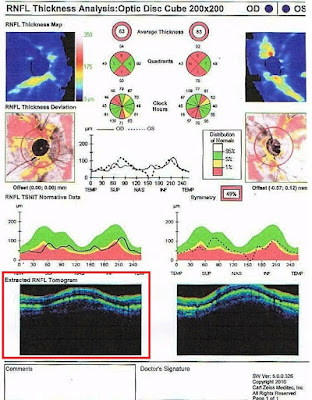 Posted by Editor: Syed Shoeb Ahmad; Sub-Editor: Ghuncha Khatoon at 3:48 AM No comments: 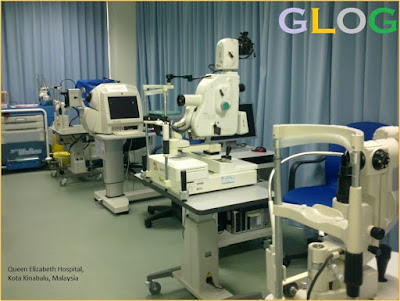 Posted by Editor: Syed Shoeb Ahmad; Sub-Editor: Ghuncha Khatoon at 12:45 AM No comments: