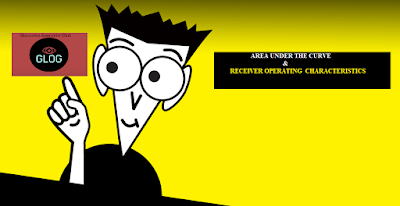 AUC ROC is one of the most important evaluation metrics for any classification model’s performance.

AUC stands for "Area under the ROC Curve." That is, AUC measures the entire two-dimensional area underneath the entire ROC curve.

Receiver Operating Characteristic (ROC) is a proven yardstick to measure the accuracy of diagnostic tests. The test divides the study population into positive (diseased) or negative (non-diseased). This is done by finding a cut-off or threshold which differentiates between diseased and non-diseased (e.g. IOP= 21 mmHg). The ROC Curve tells us about how good the model can distinguish between the two conditions. A good model can accurately distinguish between the two. Conversely, a poor model will have difficulty in separating the 2 test parameters.

Let us assume we have a model which predicts whether the patient has a particular disease or not. The model predicts probabilities for each patient (in python researchers use the "predict_proba” function). Using these probabilities, we plot the distribution as shown below: 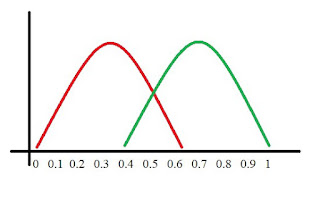 Now we pick a value where we need to set the cut-off i.e. a threshold value, above which we will predict everyone as positive (with disease) and below which will predict as negative (without disease). We will set the threshold at “0.5” as shown below: 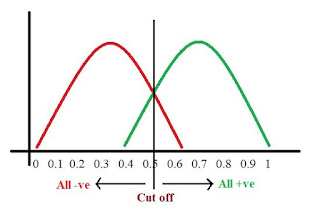 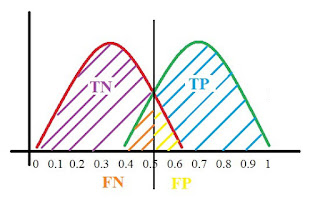 Here, we have a basic idea of the model predicting correct and incorrect values with respect to the set threshold or cut-off.

To plot ROC curve, instead of Specificity we use (1 — Specificity) and the graph will look something like this: 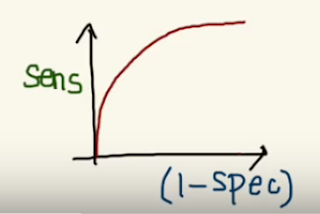 So now, when the sensitivity increases, (1 — specificity) will also increase. This curve is known as the ROC curve.

Area Under the Curve:

The AUC is the area under the ROC curve. This score gives us a good idea of how well the model performs.

Let us take a few examples: 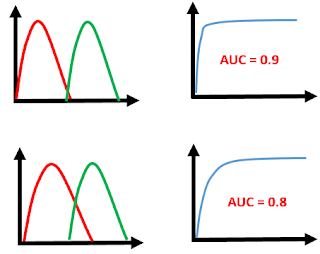 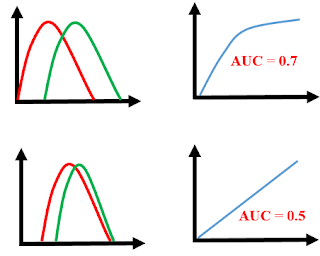 As we see, the first model does quite a good job of distinguishing the positive and the negative values. Therefore, in that curve the AUC score is 0.9 as the area under the ROC curve is large.

If we take a look at the last model, the predictions are completely overlapping each other and we get the AUC score of 0.5. This means that the model is performing poorly and it’s predictions are almost random.

Thus, AUC ROC indicates how well the probabilities from the positive classes are separated from the negative classes. 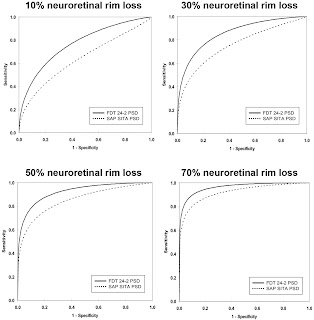 Unfortunately, diagnostic tests such as ROC have some limitations, such as the test may have a different sensitivity or specificity for the disease at different stages (for e.g. the test may give a different diagnostic yield in early glaucoma compared to advanced glaucoma). It may also be affected by covariates in the studied population (e.g. age, sex, rural-urban and co-morbidities). In such a mixed population, a single “pooled” ROC is often used as an average for the performance of the test. Regression analysis have also been done to assess the influence of covariates on the ROC curves.