The term “optic nerve head” is preferable to “optic disc” since the latter term suggests a flat structure without depth. 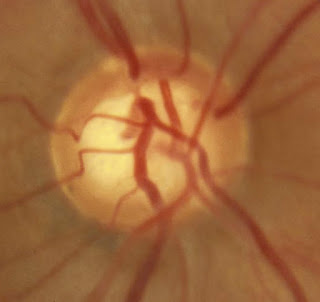 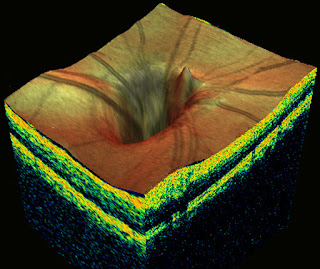 The ONH comprises of nerve fibers that originate in the ganglion cell layer of the retina and converge upon the optic nerve head (ONH) from all over the fundus. At the surface of the ONH, the axons of the RGC bend acutely to exit the globe through a fenestrated scleral canal, called the lamina cribrosa.

In the ONH, the axons are grouped into approximately 1000 fascicles or bundles and are supported by astrocytes.

The diameter of the optic nerve expands to approximately 3 mm just behind the sclera, where the neurons acquire a myelin sheath. The ONH is also the site of entry and exit of the retinal vessels. This vascular system supplies some branches to the ONH, although the predominant blood supply for the nerve head comes from ciliary circulation. 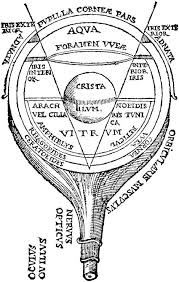 DIVISIONS OF THE ONH: 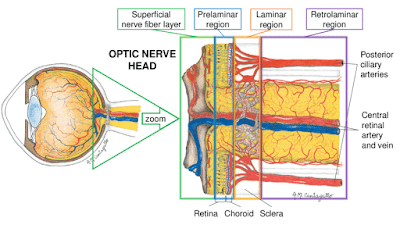 The main source of arterial supply to the ONH is through the posterior ciliary artery circulation. However, the retinal nerve fiber layer is supplied by retinal circulation.

The surface nerve fiber layer is mainly supplied by arteriolar branches of the central retinal artery which anastomose with vessels of the prelaminar region and are continuous with the peripapillary retinal and long retinal peripapillary capillaries. The temporal region may also be supplied by one or more of the ciliary-derived vessels from the posterior ciliary artery circulation in the deeper prelaminar region, which may occasionally enlarge to form cilioretinal arteries. The cilioretinal artery when present, usually supplies the corresponding sector of the surface layer.

The prelaminar and laminar regions are supplied primarily by Short Posterior Ciliary Arteries (SPCA) which form a perineural circular arterial anastomoses at the scleral level, called the “Circle of Zinn-Haller”. Branches from this circle penetrate the ON to supply the prelaminar and laminar regions and peripapillary choroid. The circle is not present in all eyes, in which case direct branches from the SPCA supply the anterior ON. The peripapillary choroid may also minimally contribute to the anterior ON.

The retrolaminar region is supplied by both the ciliary and retinal circulations, with the former coming from recurrent pial vessels. Medial and lateral peri-optic nerve SPCAs anastomose to form an elliptical arterial circle around the ON, which is also referred to as the Circle of Zinn-Haller. The central retinal artery provides centripetal branches from the pial system and frequently but not always gives off centrifugal vessels.

Although derived from both the retinal and ciliary circulations, the capillaries of the ONH  resemble more closely the features of retinal capillaries than of choriocapillaries. These characteristics include: tight junctions; abundant pericytes; nonfenestrated endothelium. They do not leak fluorescein and may represent a nerve-Blood barrier.

Venous drainage of the ONH occurs mainly through the central retinal vein, although a small portion may occur through the choroidal system.

Astrocytes provide a continuous layer between the nerve fibers and blood vessels in the ONH. The astrocytes are joined by “gap junctions” which resemble tight junctions but have minute gaps between the outer membrane leaflets.

The Muller cells are a major constitutional element of the intermediary tissue of Kuhnt, which separates the nerve from the retina, whereas the border tissue of Jacoby separates the nerve from the choroid. Astrocytes also play a role in the remodeling of the extra cellular matrix of the ONH and synthesizing growth factors and other cellular mediators that may affect the axons of the RGCs and contribute to health or susceptibility to disease. 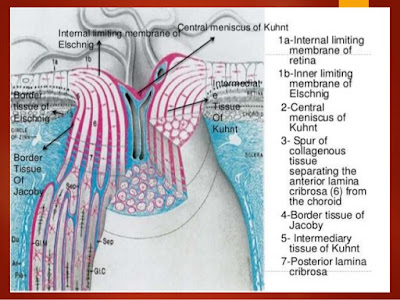 The Lamina Cribrosa (LC) is a porous region of the sclera with a specialized extracellular matrix consisting of fenestrated sheets of connective tissue and occasional elastic fibers lined with astrocytes. Astrocytes may respond to changes in IOP leading to axonal loss and RGC degeneration at the level of LC. The extracellular matrix components in the LC are different from those seen in the sclera or pial septa. The decrease of hyaluronate with ageing, especially in Primary Open Angle Glaucoma, possibly increases the susceptibility to elevated IOP. The LC is thinner in glaucomatous eyes compared to normal eyes.

CSLO of the pores in the LC has shown that in glaucomatous eyes the pores are nearly circular compared to the compressed pores seen in non-glaucomatous eyes. The superior and inferior parts of the ON have large single pore areas with thinner connective tissue and glial cell support. A majority of RGC axons exit through the LC taking a direct course. However, about 10% of the axons exit more peripherally, where the LC is more curvilinear, which may influence the regional susceptibility for glaucomatous optic nerve fiber loss. The size of the laminar openings for the retinal vessels does not correlate with the LC area.

The extracellular matrix in the LC is composed of: Collagen types I-VI, laminin and fibronectin. The cribriform plates are composed of a core of elastic fibers with a sparse, patchy distribution of collagen type III, coated with collagen type IV and laminin. Cell adhesive proteins vitronectin and thrombospondin as well as proteoglycans (macro molecular components of connective tissue) have been found in the LC also. Abnormalities of this extracellular matrix may contribute to glaucomatous damage seen in patients with glaucomatous optic atrophy. LC cells in glaucomatous eyes also express more profibrotic genes than cells from normal LC. These differences in the LC extracellular matrix may contribute to the biochemical properties of the LC.

A rim of connective tissue occasionally extends between the choroid and optic nerve tissues, especially temporally. This is called the border tissue of Elschnig.

Posterior to the globe the optic nerve is surrounded by meningeal sheaths (pia, arachnoid and dura) which consist of connective tissue lined by meningoepithelial cells or mesothelium. 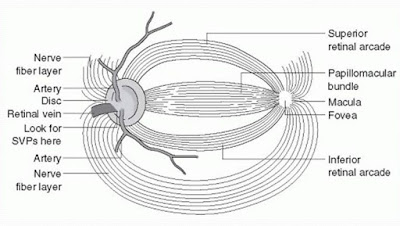 Axons of the RGC pass to the ONH in a characteristic pattern.
Fibers from the temporal periphery arch above and below the macula and papillomacular bundle as superior and inferior arcuate nerve fibers with a horizontal raphe lying in between. Those from the central retina (known as the papillomacular bundle) and nasal fibers take a more direct path to the ONH. The nasal fibers also form the superior and inferior radiating fibers but without a horizontal raphe dividing them.

Arcuate fibers are the most sensitive to glaucomatous damage. On the temporal side of thefundus, these fibers stop abruptly at the horizontal raphe. Therefore, they produce characteristic nasal step defects in glaucoma. Radiating fibers from the nasal side and more resistant to damage. They also do not stop at the horizontal raphe. Therefore, temporal wedge defects do not respect the horizontal meridian. The most resistant retinal nerve fibers arr those from the macula (papillomacular bundle). Thus, central vision is usually preserved even in advanced glaucoma.

AXONS IN THE ONH:

The arcuate nerve fibers occupy the superior and temporal portions of the ONH with axons from the peripheral retina taking a more peripheral position in the ONH. The arcuate fibers are the most susceptible to early glaucomatous damage. The papillomacular fibers pass inferotemporally in the nerve where the axonal density is high. They intermingle with extramacular fibers, which may explain the retention of central vision in early glaucomatous optic atrophy.

The normal ONH contains 70,000-1.2 million axons, these afferent nerve fibers from the eye carry sensations towards the brain. 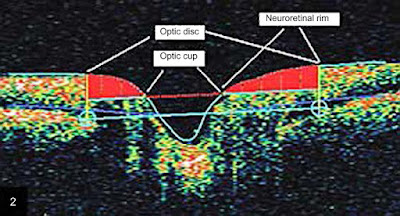 Herpes zoster ophthalmicus is rarely associated with posterior segment changes. This is specially rare so in immunocompetent individuals.

In a case report published in the latest issue of the Journal of Ophthalmic and Vision Research (JOVR) we discuss a 40-year-old, immunocompetent patient who was diagnosed with herpes zoster ophthalmicus and central retinal artery occlusion on initial presentation. Subsequently, he went on  to develop neovascular glaucoma. 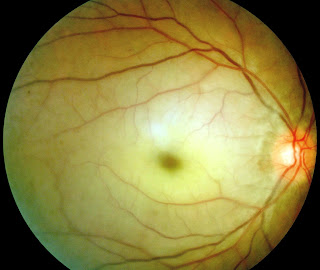 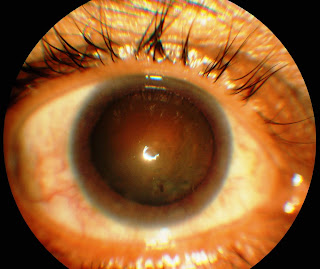 The present case report indicates that neovascular glaucoma is a possible complication in such a scenario. 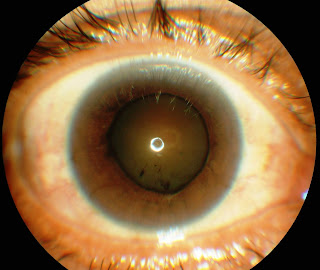