Ocular Hypertension (OHT) is a condition in which the intra-ocular pressure (IOP) is elevated above an arbitrary cutoff value, typically 21 mmHg, in the absence of optic disc, retinal nerve fiber layer (RNFL) or visual field (VF) abnormalities (AOA).

The term OHT is used when the IOP is found to be >21 mmHg on 2 consecutive occasions in the absence of detectable glaucomatous damage (Kanski).

The expression OHT was first used by Drance in 1962 but was not defined in English language publications until 1996 by Perkins and others (Medscape). A number of authorities, such as Spaeth, have advocated stopping the use of this term and to replace it with “Glaucoma suspects”.

OHT is also characterized by anatomically normal, open angles. Other ocular conditions such as narrow angles, neovascularization and uveitis which could cause elevated IOP should be ruled out. 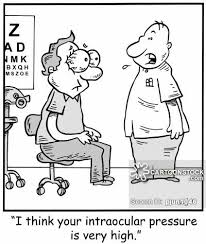 Population-based studies (Beaver Dam, Baltimore, Barbados, Rotterdam etc) have projected estimates of 4-10% individuals above 40 years of age having IOP of 21 mmHg or higher. OHT presumably has a 10-15 times greater prevalence than Primary Open Angle Glaucoma (POAG). However, only 1% of those individuals go on to develop POAG.

The Barbados Eye Study found the incidence of IOP greater than 22 mmHg to be 5 times higher in blacks than in whites.

The Los Angeles Latino Eye Study found Latinos to be at higher risk of OHT than non-whites but lower than blacks.

Among patients with OHT, around 0.5-1% per year develop glaucomatous changes over a period of 5-10 years. The OHTS found that over a 5 year period, patients with IOP >24 mmHg or more have a 10% overall risk of developing glaucoma.

African-American race have annual risks of greater than 2%.


The Gutenberg Health Study has found positive association of high IOP and systemic diseases such as systemic Hypertension, Diabetes Mellitus, smoking and obesity.

Retinal vascular occlusion was found in 3% of OHT patients. 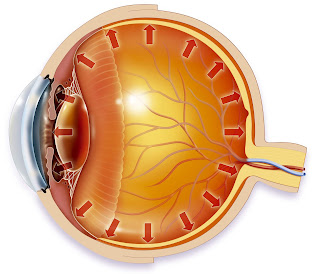 Family history of glaucoma should always be taken. The severity of the glaucoma in the family (whether the family member was on eyedrops or had to undergo surgery; were any family members blind from glaucoma) are significant pointers.

Current medications (drugs for hypertension can cause fluctuations of IOP), corticosteroids (can cause elevated IOP).

A comprehensive eye examination should be performed to rule out POAG and secondary causes of glaucoma. Gonioscopy should be done to assess for angle closure and secondary causes such as angle recession, pigmentary glaucoma and pseudoexfoliative material. Fundus examination is required to look for Glaucomatous Optic Atrophy and other fundus abnormalities that could account for any non-glaucomatous visual field defects or vision loss (optic disc drusen, optic pits, macular disease, retinopathy etc). 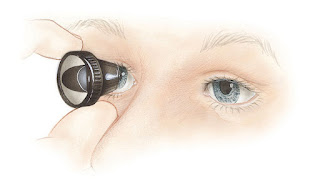 Tonometry should record IOP measurements of both eyes, method used (non-contact tonometer/NCT, Goldmann Applanation Tonometer/GAT) and the time of measurement. Certain factors which could falsely raise IOP (tight collars, straining) should be excluded. Tonometers should be regularly calibrated. Adjustment for Corneal thickness should be made. In obese or anxious patients IOP can falsely rise on the slitlamp. Therefore, these patients should be made to lean back on the examination chair and a tonopen, Perkins or pneumotonometer used to recheck the IOP.

In cases of corneal abnormalities a tonopen or pneumotonometer is preferred. IOP shows circadian rhythm with higher IOP in the morning and in supine position. A difference of 3 mmHg or more between the two eyes is suggestive of glaucoma. A diurnal variation of more than 5-6 mmHg is suggestive of increased risk of POAG.

Visual fields can be tested on 24-2 program of Humphrey perimeter. The earliest changes seen in converters are: nasal step, temporal wedge or paracentral scotomas (especially superiorly). Generalized depression may also occur. SWAP has been found to detect VF defects 3-5 years earlier than conventional perimetry. In 12-42% patients previously diagnosed as OHT VF changes may be seen on SWAP. There are some studies suggesting VF changes occurring earlier on 10-2 programs rather than 24-2 programs.

Repeat IOP readings should be taken over time and correlated with VF tests, optic nerve examination and pachymetry measurements before diagnosis or therapy is instituted.

Optic disc photos should be taken as they are more objective means to assess progression rather than VFs.

Both structural (OCT) and functional (VF ) changes should be analyzed since one can precede the other.

No single drug showed significant VF protection in OHT with the evidence available.


A 20% reduction in IOP has been found to delay or prevent the onset of glaucoma. The OHTS suggests that treatment of patients with IOP >24 mmHg (among those who have a greater than 2% risk per annum of developing glaucoma) is cost effective.

Individualization of therapy is the key.

Posted by Editor: Syed Shoeb Ahmad; Sub-Editor: Ghuncha Khatoon at 5:55 AM No comments: