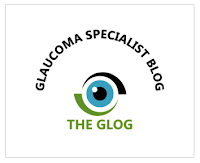 Perhaps this year is the most anticipated period in the lives of ophthalmologists. The number 2020 signifies normal vision and conjures our expectations in achieving this level in patient management.

The Glog is an effort to share glaucoma related information. And we hope this year proves to be informative, interesting, friendly and warm in our little world. This blog is the little cocoon to take one away from all of life’s troubles and just have a nice time both professionally and personally. It is a place to learn and share and just be happy. I hope we can achieve that target here.

We also have brought on board a friendly person who can help contribute new ideas to The Glog. Dr Ghuncha Khatoon has consented to help us as sub-editor now. We extend our heartiest welcome to her.

The Glog wishes everyone a very happy, prosperous and peaceful 2020.

Posted by Editor: Syed Shoeb Ahmad; Sub-Editor: Ghuncha Khatoon at 10:39 AM No comments:

Trabeculectomy currently remains the “gold standard” for filtration surgery.
A disadvantage of this procedure is postoperative fibrosis and scarring, leading to bleb failure and rise of intra-ocular pressure (IOP).
Concern over postoperative scarring has led to the widespread intra- and post-operative use of antifibrotic agents, particularly 5-Fluorouracil(5-FU) and Mitomycin C (MMC). These agents, however, may bring an increased risk for chronic bleb leaks, hypotony, blebitis and even endophthalmitis.
One solution to this challenge may have its roots in the burgeoning field of “tissue bioengineering”.

The biodegradable collagen matrix (BCM) implant is being marketed, depending on the country, as OlogenTM (Aeon Astron Corporation) or iGenTM (Life Spring Biotech Company), both based in Taipei, Taiwan. 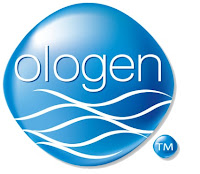 It takes advantage of micro-technology and tissue bioengineering by having a molecular structure that permits the formation of a spongy filtration bleb without the use of antifibrotic agents.
The implant is a 3D porous scaffold made of 1% collagen/C-6-S copolymer with a pore size ranging from 20-200µ.
It measures 4x7 mm and has a cylindrical shape, allowing for easy insertion and manipulation during glaucoma surgery.
The implant encourages the formation of a spongy meshwork of fibroblasts and connective tissue in a controlled and organized pattern. It forces fibroblasts and myofibroblasts to only grow into the pores, during the early postoperative period and secrete connective tissue in the form of a loose matrix.
After the polymer scaffold biodegrades, it leaves a milieu of organized fibroblasts, myofibroblasts and extra-cellular matrix. This leads to a reduced scar formation.
The implant also maintains an elevated bleb while the healing process is underway.
In trabeculectomy, early inflammation can lead to adhesion of the conjunctiva and episcleral surface during the early postoperative phase. 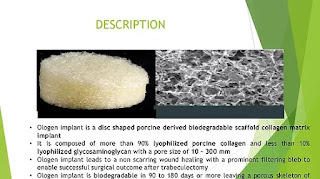 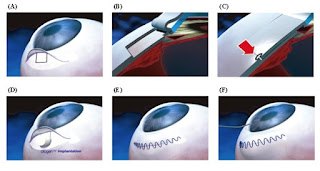 ANIMAL STUDIES:
Chen et al performed trabeculectomy with the BCM implant in one eye of 17 rabbits and standard trabeculectomy without anti-fibrotic agents in the fellow eye as control.
For the first 2 post-operative weeks IOP was similar in the two groups. Subsequently, the IOP decreased in the implant group as the matrix dissolved. Conversely, the IOP in the control group progressively elevated to post-operative levels.
Another study was performed in 30 rabbits undergoing trabeculectomy with the implant were compared with a control group of rabbits undergoing trabeculectomy without it.
In both groups, the conjunctiva was incompletely sutured to produce a wound leak. Although the conjunctival defect sealed equally well in both groups, IOP was significantly lower in the implant group after conjunctival healing was complete.

HUMAN STUDIES:
The BCM implant is now available in Europe and Asia.
Chen and Hsu reported the preliminary results of the experience in 12 patients. They found a 64% reduction in IOP four months after surgery. The average number of glaucoma medications also decreased from 2 to 0.3.
Ruokonen et al. reported their experience in 17 patients with open angle glaucoma. IOP improved from 30 to 14 mmHg within 3 months after surgery. The average number of glaucoma medications required decreased from 3.3 to 0.2. Eleven eyes developed bleb encapsulation with elevated IOP after 7 months. Of these some responded well to needling and 2 required further surgery to control IOP.
Another study reported the outcomes of 20 consecutive patients who underwent trabeculectomy with implant placement. After 3 months, mean IOP decreased from 33.8 to 13.3 mmHg. All patients tolerated the implant well and no systemic adverse-effects were noted.
Researchers in China studied the effects of trabeculectomy with the implant versus trabeculectomy without anti-fibrotics. The mean IOP was significantly lower in the implant group after 6 months of follow-up. The risk of bleb failure was 30% lower in the implant group.
The BCM implant is also being used in cases of combined cataract extraction and trabeculectomy. Grewel et al. studied 10 patients with POAG who were undergoing combined phacoemulsification with trabeculectomy and implant placement. At 3 months post-operatively, mean IOP had improved from 20 to 9 mmHg and the mean number of topical glaucoma medications needed reduced from 2.7 to 0.9.

The BCM implant invokes the concepts of tissue bioengineering to promote successful glaucoma filtration surgery. The implant is largely safe, easy to handle and effective in reducing IOP without any side-effects as seen with anti-fibrotic agents.


Posted by Editor: Syed Shoeb Ahmad; Sub-Editor: Ghuncha Khatoon at 5:39 AM No comments: 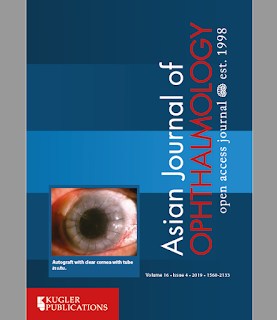 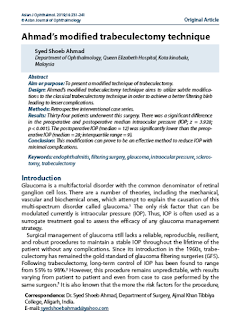 Posted by Editor: Syed Shoeb Ahmad; Sub-Editor: Ghuncha Khatoon at 4:53 AM No comments: 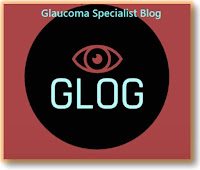 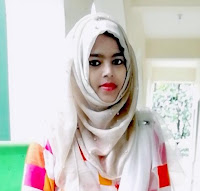 Selective laser trabeculoplasty (SLT) is an effective treatment option for reduction of intra-ocular pressure (IOP) in patients with ocular hypertension.
SLT is at least as effective as Argon Laser Trabeculoplasty at lowering IOP in many forms of Glaucoma. SLT decreases IOP fluctuation and can be successfully used as a primary or adjunctive therapy for management of both early and advanced Glaucoma. Limited evidence suggests that SLT is cost effective as primary therapy for patients with Glaucoma. 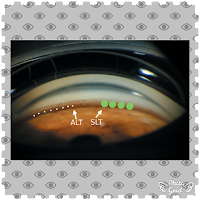 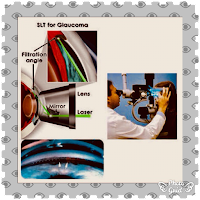 SLT is based on the principle of selective laser thermolysis.
According to this concept, radiation energy applied to trabecular meshwork (TM) selectively targets pigmented cells without causing significant collateral thermal damage.
The SLT base is a 532-nm frequency-doubled Q-switched Nd:YAG laser with a fixed spot size of 400-nm and duration of 3 nanoseconds.
The power range for treatment varies from 0.4-1.4 mJ.
These parameters spare surrounding non-pigmented cells as the pulse duration is significantly shorter than thermal relaxation time (1 microsecond) of melanin granules contained in pigmented TM cells.

The exact mechanism by which IOP is lowered by SLT is unknown and probably multifactorial.
SLT appears to lower IOP by increasing trabecular outflow.
Proposed mechanism of action include: structural alteration inflammatory response with remodeling of extracellular matrix and stimulation of TM cell proliferative changes.

SLT IN SPECIFIC TYPES OF GLAUCOMA

Normal tension glaucoma:
SLT can have a significant IOP lowering effect in patients with NTG, albiet with a smaller absolute reduction in IOP. The use of SLT in NTG has been limited historically because of the fact that the most reliable predictor of success is a higher preoperative IOP. Lee et. al. treated 45 NTG eyes with 360-degree SLT after 1 month of medication washout, the IOP was significantly reduced.

SLT is an effective treatment option for the reduction of IOP in patients with ocular hypertension and open angle glaucoma. Based on published data SLT is at least as effective as ALT and medications.

There is evidence that SLT can successfully be repeated to achieve additional or recurrent IOP reduction in eyes that had a modest response to initial treatment.

Adverse effects are uncommon after SLT. The most common complications being mild and transient rise in IOP immediately following the procedure.

SLT can be a useful and effective treatment option when medications are ineffective or are causing unwarranted side-effects.